This blog also hosts my rejected work. This story was originally written for a Pune-based daily.

Lokesh Gulgulia, 15, renounces the world to become a Jain sanyasi on 30 October 2014 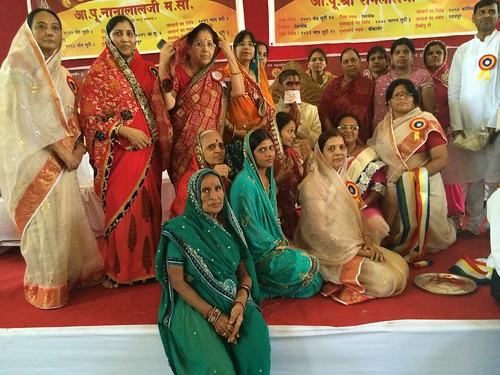 When he decided on 15 March this year to follow his guruji into the mumukshu way of life, one of Lokesh Gulgulia’s uncles suggested he take a trip abroad to fulfil some of his desires. Lokesh replied, “Kaka, I have so many desires. How many can you fulfil? And when will they end?” A mumukshu is one who is treading the path to moksha.

At a ceremony held in his honour at Talera Gardens in Market Yard in Pune on Sunday, Lokesh was dressed as groom. Turban, bejewelled achkan and ropes of pearls around his neck. A patch of cloth over his mouth, marked with a swastik, stops him from involuntarily killing any organisms with his breath. Around him ensues the pageantry of any organised religion. An enthusiastic compere with a predilection for weak shairee brings on stage the women to sing melodies; sniffling children to sing educational rhymes to the tune of Bollywood hits. In Jain oral tradition, most speakers begin their talk with parable. Two rows of chief guests bear two-and-a-half hours of this with seasoned smiles.

Lokesh also sits through it with the patience of a saint. His parents, especially his mother Chanda, is repeatedly felicitated for her bravery. Since he announced his decision to renounce worldly life, his hours have been filled with invitations from members of his community for meals. His mother and aunt went shopping for the clothes of a bridegroom. There’s mehendi on his hands. It’s a race with time for the parents to fulfil their own desires for their son. Once he joins his Gurudev Ramlal Maharaj Sah in Bangalore, he will wear only white muslin. He will be given a new name, based on an inherent quality the acharya sees in him and he will become a muni. He will walk barefoot everywhere, live on food that he will beg daily for and be celibate. His only occupation will be the advancement of his consciousness.

When he speaks, it’s with the firmness of an old soul. “I used to always talk about becoming a sanyasi as a child,” says the former student of Pawar Public School. “After I finished my ninth standard, I decided I wanted to go this way. I didn’t see the point of completing my tenth if I didn’t intend to integrate into this world. After education, it’s a job, then salary — I don’t want all these things. I can learn much more useful things in one year with my guru. Even as child, I used to wish there could be a way I could live such that no living being would be scared of me.”

The Gulgulias — father Paras, Chanda and their three sons — moved to Pune five years ago from Balaghat in Madhya Pradesh. They run a construction business and are very devout. They had an inkling that their youngest son didn’t just play sadhu-sadhu; he seemed genuinely interested in renunciation and happier in the company of other sadhus and sants than most children.

In preparation for his future life, he no longer hangs out with friends and spends his days with munis and sadhus. From April until recently, he was in Mumbai with a group of sadhus stationed there. They do not travel in the rains as they believe organisms in rainwater will die upon contact with their skin. Over there, he has been learning how to think while eating, how to control the senses. “I liked sweets, so that was hard,” he says in a grave tone. “I had to give up maida, and other things the body does not need.” He reluctant to have pictures taken and doesn’t use a cell phone.

The word he, and others, use repeatedly is ‘sayyam’ or control. On October 30, he will join his guruji in Bangalore and then walk with him to the next destination if he wills. Will he miss his family? His attachment, he explains without affectation, is not only towards his blood relatives. He feels the same amount of attachment to other humans; and to plants and animals. He was never curious about amorous activities.

Professor Bipin Doshi, who teaches Jain Philosophy at the Mumbai University, says it’s not uncommon within the religion for boys and girls even younger than Lokesh to choose the path to renunciation. “Fifteen is not a young age,” says the professor. “Children as young as four and five do this. In some children, you can spot intelligence or talent at a young age. Similarly, some children are never interested in the world and worldly things.”

It would be inaccurate to assume that the life of a muni or sadhu is hard, according to Doshi. “They don’t have the stresses of studies, exams, jobs,” he points out. “It’s simpler. They get their food and keep moving as much as they can. At 15, the attachment to parents is not too strong. He could have been going abroad for studies or to a boarding school.”